Moving to and from Oxshott couldn’t be easier when you move with us. We care about making every detail right and getting the job done efficiently. Our drivers, packers and movers are excellent and experienced people who make a wonderful team. We know the area very well, so getting you from one place to another is a cinch.

Before you move, we can get you all the things you need in terms of packing, including sturdy cardboard boxes. On the day of your move, we’ll arrive bright and cheerful, ready to tackle the job with energy and efficiency. We also run storage units that suit both long- and short-term requirements. Looking for removals companies in Oxshott needn’t be a wearying slog – you’ve found WH Cox & Son and we’re the best choice you could make.

We are based 7 miles from Oxshott

About Our Oxshott Removal Services

Hidden away in the heart of Surrey. Oxshott is a suburban village with a large amount of greenery dispersing residential areas. Either side are the larger towns of Esher and Leatherhead, but its Oxshott with the slightly more famous reputation. This is largely due to a Daily Telegraph survey published in 2010 which revealed it was the village with the most footballers in England, particularly with Chelsea’s main training ground just on the outskirts. 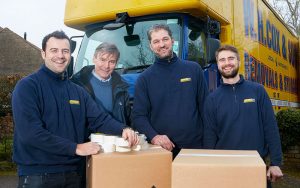 A little about Oxshott…

On the right bank of the River Mole, Leatherhead is a town that dates back to Anglo Saxon England. The local museum traces the history of the town from AD 880 and the Domesday Book of 1086 features Leret, referring to Leatherhead. Hawk’s Hill on the west side of the river is believes to be an old Saxon burial ground, to the delight of local historians.

It’s isn’t all ancient graves though, as the Running Horse pub dates as far back as 1403 and is one of the oldest buildings in Leatherhead by a stretch. Although it has been questioned by academics, Elizabeth I is said to have spent a night at the inn when the banks of the river flood and she, and her entourage, were unable to cross.

Today, the town has re-developed into a splendid market town, where period buildings are joined by supermarkets and shopping facilities. Since 2002 the town has received lots of attention and re-development, with council landscaping, water features and local amenities sprouting up everywhere.