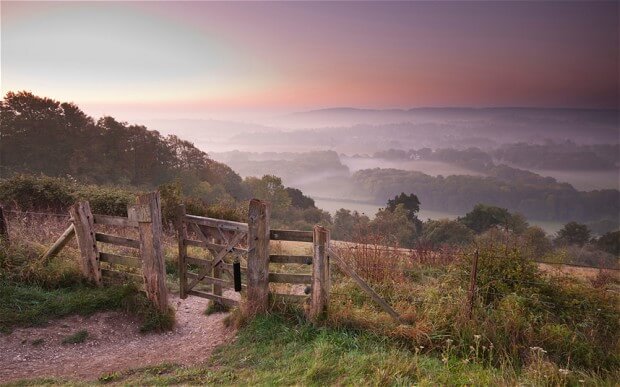 Over the course of more than four decades as a removal company in Surrey, we’ve become increasingly aware of its extraordinary beauty. Although it’s Kent that’s often called the ‘garden of England’, we sometimes feel that it’s this county that deserves the accolade. In short, Areas of Outstanding Natural Beauty (AONB) are parts of the countryside in England, Wales and Northern Ireland (in Scotland, the term ‘National Scenic Area’ is used instead), which have been made conservation areas because of their wonderful landscape. Surprisingly, there are only two in Surrey – we felt certain there had to be more (we’re a little bit biased, in case you couldn’t tell). The first is the Surrey Hills. Spanning a quarter of the county, they encompass the chalk hills of the North Downs and stretch from Farnham to Oxsted. Within them lie the Greensand Hills of Haslemere. From thick woodland to quaint, picture-postcard villages to bustling market towns, exploring this part of Surrey is like stepping into a technicolor filmset. The landscape is teeming with wildlife, rare insects and plants, and thanks to their photogenic beauty, the Surrey Hills have the honour of being the very first place to be given the AONB designation back in 1958, ensuring that they remain as they are, carefully conserved and managed (some sections are owned by the National Trust), both for us and for future generations to enjoy indefinitely.

As we move our clients to their new homes, we often head into the south-west corner of the county, and so we’re frequently brought into Surrey’s other AONB – the High Weald, which it shares with West Sussex, East Sussex and Kent. The High Weald is approximately 560 square miles in its reach, and when looked at from an aerial view, it resembles a charming, almost heart-rending patchwork of little farms, chocolate box villages, ancient parks, and country lanes. There are few people who aren’t moved by its old-world attraction. Among its claims to fame is the fact that when the country’s Areas of Outstanding Natural Beauty are ranked by size, the High Weald comes fourth. It’s a mosaic-like wonderland of lovely walks and fresh air.