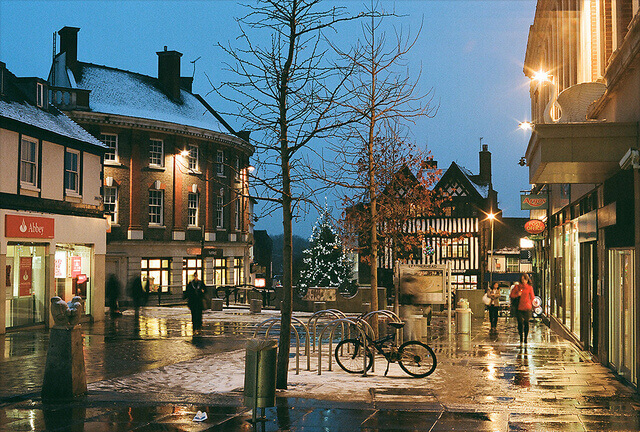 This Surrey town, population just over 11,000, lies on the right bank of the Mole river, with outer London just at its edge. Its existence has been documented since the time of Anglo Saxon England, approximately 880 AD. After a period of gradual pedestrianisation in the second half of the 1900s, its reputation grew and today its joint cinema/theatre is among its many features. The yearly London-Surrey cycle classic passes through the town, during which time many of the streets leading to the town centre close to traffic.

Perhaps the most recent events that catalysed the growth of the town were the decision by Mole Valley council to create a modern, pedestrianised high street at the end of the 1970s along with a one-way system running around it. Then, in the mid-80s, Leatherhead was connected to the English motorway system with the construction of the M25, leading to the north.

The town’s symbol is that of a swan with a sword placed in its beak, as appears on the Leatherhead and Mole Valley’s coats of arms. The swan can also be spotted on the Leatherhead Football Club insignia, the Swan Shopping Centre, the leisure centre, and the Therfield School logo.

Over years of carrying out removals in Leatherhead, we’ve learned more and more about the place and its history. We’ve seen the way the high street has flourished. Up until 2002, it was regarded unfavourably as one of the least popular in the country. But since then, a combination of steps has altered its fortunes for the better. Trees were planted and water features installed, and bit by bit, it became a place for locals and visitors to meet and enjoy the arts, restaurants, cafes and bars. In 2004, the Leatherhead Drama Festival was created, with Sir Michael Caine as its patron; you can find out more about this event at www.leatherheaddramafestival.org

The town is served by its own railway station, with connections to London Waterloo, London Victoria, and Wimbledon, at which it’s possible to transfer to the London Underground.